There are certain pairs that just go together like nothing else.

Peanut butter and jelly. Green eggs and ham. And toddlers with their tricycles.

Tricycles are not only one of the best yard games for kids, but they also help trach balancing, coordination, and mastering your toddler’s surroundings.

Nothing trains your situational awareness like being on an object that can go faster than your feet.

So what’s the deal with toddlers and tricycles?

We’re here to break that down.

Why Are Tricycles Better Than Bicycles for a Toddler?

Right now, in your adult life, you don’t have to think about balancing unless you’re literally walking on a tightrope, and that’s because it’s a skill that we develop, in the background, just by exploring our world and growing up.

If you remember the first time you rode a bike, I’m willing to bet that the handlebars jittered a bit, and the front wheel turned left, then right, then left again really fast while you were trying to figure out how to control it.

With a tricycle, a toddler is given the ability to control something that isn’t just their own two legs, but in a controlled, safe environment.

They have to move the wheels and feel how they react to the ground, and eventually build up speed, and learn how to control these wheels when they’re moving faster.

Because the front wheel still reacts 100% to their input, they learn control and direction, which are all building blocks in developing balance.

Starting with a tricycle gives them the foundation to later ride a bike, but starting a toddler off on a bike generally isn’t a good idea.

One final factor I want to discuss is that most tricycles have a very low center of gravity, so your toddler is fairly close to the ground.

They’re in a bucket-style seat. Bicycles position them on top of a stand, which adds to the balancing act. You just want to take it one step at a time so they can learn without being overwhelmed.

What Type of Tricycle is Best for Your Kid?

There are three main types of tricycles.

We’ve outlined their strengths and weaknesses below so you can make a better choice for your little one.

Upright tricycles have a raised seat that emulates a bicycle seat. You don’t have that low-to-the-ground bucket-style seating.

Generally, upright tricycles are considered to have a higher skill threshold and may not be the first choice for a two- or three-year-old.

Upright tricycles don’t have a frame that’s quite so low to the ground, so they’re built to last longer without scraping up the paint.

With an upright tricycle, you require more balancing, but you can usually go a little faster since there’s more room for the pedals and front wheel to gain momentum.

Most upright tricycles are larger than tadpoles, but smaller than recumbents.

Recumbent tricycles are bucket seat-style trikes that allow you to sit back and relax.

If you’ve ever used a recumbent bicycle exercise machine, you’ll be familiar with the seating arrangement.

You sit back at about a 40° angle, while your legs stick out in front on either side of the chain or singular wheel on the front.

For most recumbent tricycles for toddlers, they’re going to have one big wheel in the middle, with a leg on either side.

This is actually a great leg workout for any child, but they’re not going to be doing much with their arms.

Nearly all recumbent tricycles come with a guard over the central wheel to reduce the potential harm to children, but kids have a way of working these off.

If a recumbent tricycle undergoes a lot of damage, the first thing to go is the frame, which will impact or impair use.

Tadpoles are like the opposite of recumbent tricycles. These have a big wheel in the back, and both stabilizing wheels in the front.

You lay back in a seat with an arch to keep your back comfortable, and most of your body is horizontal while you operate this.

The pedaling mechanism juts out from the axle.

Because of how exposed a lot of the metal can be for adult tadpole tricycles, there’s a lot of plastic covering (and sometimes metal) over these for toddlers.

A tadpole tricycle would work well if you’re going camping or somewhere with less-than-perfect terrain, and you want your toddler to still get some tricycle time in.

I don’t see a lot of children riding these on asphalt, but there’s no reason that you couldn’t.

Tadpole tricycles don’t require a lot of maintenance and can be comfortable for your little ones to ride, while promoting leg strength.

When Should You Switch to Bicycles?

Making the switch to a bike could be a big leap, and not every child will be ready for it at the same time.

Different children will develop their balancing and mastery over their center of gravity at different stages of growth.

You don’t want to push them too much to make the transition if they aren’t comfortable with it.

On average, between the ages of three and five are when you should transition them over to a bicycle.

Again, if they aren’t prepared for it, that’s completely okay.

Some children aren’t able to learn to ride properly until they’re six or seven years old. Bicycles demand an entirely new experience, and tricycles are the first step to getting there.

With four children of my own and a bustling household, I was always looking for ways to have my children get more active and burn off some of that insane energy. There just weren’t enough valuable resources available online to find out what they should be doing and what they’re too young to be doing, and that’s when I decided to make Sporty Toddler. I’m a mother, a writer, and an entrepreneur that believe we can always be doing more for our children’s healthy habits and activity. Together, let’s let your children lead a healthy life. 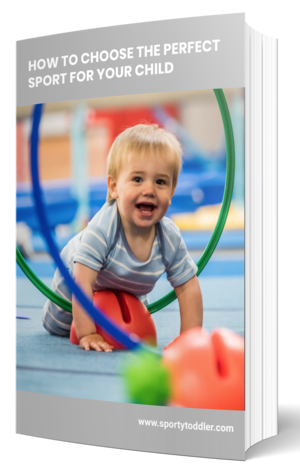 Find The Perfect Sport For Your Child

Download our FREE pdf guide and learn how to choose the best sport for your toddler.